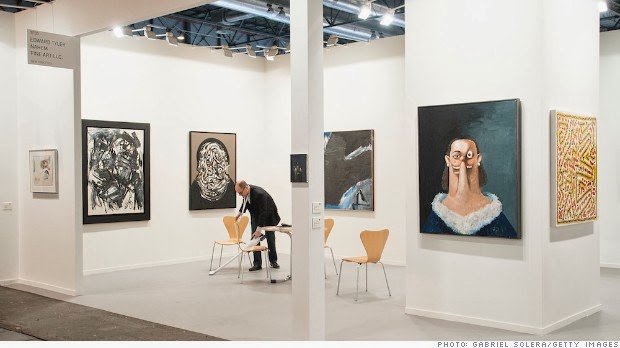 Spain's art world was whiplashed by the country's bubbly rise and quick collapse. Signs of the trauma linger at this year's ARCOmadrid art fair.
FORTUNE -- At this year's 33rd edition of Spain's ARCOmadrid contemporary art fair, it was pretty easy to tell where you stood in the art world hierarchy.

If you visited over the weekend, you were one of a diminished group of 100,000 or so civilians who forked out between 20 and 40 euros ($27.50 and $55) to bask in art that ran from canonized names like photorealist painter Richard Estes to up-and-comers like Mexican installation artist Héctor Zamora. But if you attended on Wednesday or Thursday, you were likely one of the 400 or so rich folks and art institution bigwigs who'd been invited to Spain, your trip paid in full, in the hopes that you might drop some serious dough on art.

All major art fairs have VIP programs designed to attract big spenders. But ARCO's dedication of 20% of its 4.5 million euro budget to inviting buyers and promoting the fair overseas shows how Spain's economic crisis -- now more than five years old -- has forced the fair to turn its attention from national museums and modest local buyers to big international collectors.

"In the years before the crisis, there were a lot of sales to domestic institutions. This has disappeared, and now there are more sales to foreign collectors," said Carlos Urroz, ARCO's director since 2010.

MORE: Buffett keeps mum on stocks and successor
Spain's art world was whiplashed by the country's bubbly rise and quick collapse. The Spanish art market grew 200% between 2002 and 2007, from 160 million to 480 million euros, only to crash to 271 million euros in 2009, according to a study led by Clare McAndrew, founder of research firm Arts Economics, for Barcelona's Arte y Mecenazgo foundation. The market has recovered only slightly since, hurt in part by the government's increase of its VAT (sales tax) on art works from 18% to 21% in 2012 (up from 16% in 2010).

"We're doing very badly compared to pre-crisis," said Idoia Fernández, sitting in the white ARCO cube of Madrid's Galería Nieves Fernández, where she is the director. "Last year, if it weren't for foreigners, ARCO would have been a disaster. We sold only one piece to a Spanish collector last year at ARCO, for 3,000 euros."

It's hard to know how a fair is doing, as many are loath to divulge overall sales numbers. Urroz couches his response in gallery "satisfaction."

"We don't have sales figures," he said. "We know the level of satisfaction of the galleries, and we are confident this year will be better."

When I walked through ARCO a few hours after it opened on Wednesday, the first collector and industry day, the fair's redefinition appeared to be working. The VAT had been dropped to about 15.5%, and the halls were full of elder gentlemen in expensive casual wear, women of a certain age who'd undergone extreme plastic surgery, and young guys with tight pants and waxed moustaches.
"Since Carlos has run the fair, it's made an enormous step forward. It has become so international. Not just European collectors, but ones from Latin America and the U.S.," said Thomas Krinzinger of Austria's Galerie Krinzinger, who noted that he'd already sold two pieces for between 30,000 and 50,000 euros.
And it seemed that even some wealthy Spanish buyers had returned.

MORE: Why Google should acquire Tesla
Marcia Gail Levine, special projects director at New York's Marlborough Gallery, said that the gallery had already sold four pieces by Juan Genovés for around 100,000 euros and two by Manolo Valdés for some 200,000 euros to Spanish and American collectors. "Even though there was a crisis, there are certain artists we have that people in Spain were buying. We weren't hit that bad," she said. To drive home Marlborough's immunity to Spanish flu, gallery president Pierre Levai added that ARCO's generally bad 2012 was an "exceptionally good" year for Marlborough.

To be sure, the international rich have only grown richer in the post-crisis years, and Marlborough is a high-end giant that "virtually invented the modern art market," according to The Observer. The story is not the same for the middle class of the art world, which, just like the middle class elsewhere, has been squeezed.

"The professionals and the rich come the first days to make big buys. If you have 50 million euros and it goes to 40 million, it doesn't change anything. But on the weekend, the people pay 4,000 to 5,000 euros to buy something. That wave is more affected by the crisis," said Juan Ignacio García Velilla, director of the Altxerri gallery in San Sebastián, Spain.

Idoia Fernández of Galería Nieves Fernández, for one, was saddened by the disappearance of the middle-class buyers who used to buy art at the fair on weekends.

"The market of younger professionals who would buy art instead of a 800 euro TV has disappeared," said Fernández, who had sold three pieces valued between 2,000 and 14,000 euros when we talked the first day. "We'd extended the market to them in Spain, but it's disappeared. Which is a shame. We had made buying art much more normal."

Still, things seemed a little brighter, she said. "This year, we've already sold two pieces to Spanish collectors," she said with a laugh. "So we've doubled our Spanish sales."