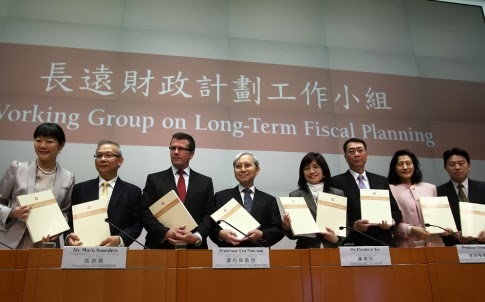 Philip Bowring is appalled by the report on fiscal planning that seeks to preserve the status quo, to protect mega infrastructure spending, yet utterly fails to address our critical challenges

In 40 years of covering Hong Kong budgets and fiscal issues, I have never seen a document as misleading and contentious as the report of the Working Group on Long Term Fiscal Planning. It is a crude attack on health and welfare spending in order to find money for already bloated infrastructure spending.

To add insult to injury, the group is mainly comprised of officials and academics enjoying huge health and pension featherbeds at public expense.

The starting point for the report is true enough - that Hong Kong has an ageing population and one that is growing only slowly. This has been known long enough. The government has been aware that years of having a very low fertility rate has been a major factor in ageing - but has done nothing to address it.

The document goes on to present a scare story of ever rising deficits caused by a stagnating workforce and rising demands for health and welfare spending. Yet it accompanies this with projections for sustained increases in capital works. The non sequitur is backed by references to guidelines laid down by Philip Haddon-Cave in the 1970s - that public spending should be no more than 20 per cent of gross domestic product, and that there should be a significant surplus on the operating budget to provide funds for capital works (in addition to capital works paid by capital revenue).

Haddon-Cave, a realist, not an ideologue, would be appalled by official inability to see what has changed. Then, Hong Kong had a young, fast-growing workforce and the need for more infrastructure to support an economy based on manufacturing and merchandise trade. Today, we have no manufacturing, a port which is past its peak, and financial and other high-value services whose input needs are not primarily related to concrete.

Determination to rig the fiscal system to support mega infrastructure projects is further underlined by the report's curt dismissal of the widely supported proposal to shift part of land revenues from capital to recurrent income. This would cause short-term reductions in revenue but long-term gains in stability. But it would not suit the vested interests who are dedicated to wasteful spending on roads and bridges as well as businesses whose profits rely on land price inflation.

Notions of economic return on capital are now alien to the bureaucracy.

The document also perpetuates a convenient official lie: that the HK$750 billion surplus of the Monetary Authority is not part of the reserves. It ignores these assets completely, suggesting the group is so ignorant of exchange rate mechanisms that it believes these are needed to defend a currency peg.

The fact is that the HK$1.5 trillion total reserves belong to the citizens and were accumulated by the government at their expense. There is a moral obligation to return some of these savings to those who earned them as they reach an age when they can no longer work. Pensions are not just a right of civil servants.

Yet, while drawing almost straight-line charts of health and welfare costs, the report takes no account of the future role of the Mandatory Provident Fund - a scheme that is inadequate and expensive but nonetheless will have an impact on retirement incomes in the future.

Nor does the report take proper account of the potential for increased workforce participation. This is not surprising, given that government bodies still adhere to retirement at 60. But if the group cared to look at official data, it would have seen that in the past four years, GDP rises have owed much to the rise in participation by those over 45 - from 64.7 per cent to 68 per cent for those 45-64; and from 5.7 per cent to 8.1 per cent for those over 65. This trend is sure to continue as most people need to work after 60.

There is nothing sacrosanct about limiting public expenditure to 20 per cent of GDP. And even assuming there is abundant reason to privatise some public trading activities and impose genuine user-pays charges on others, a government incapable of adjusting tunnel tolls for car owners but that begrudges spending on the old and infirm is contemptible.

Of course, Hong Kong must adjust to changing demography as well as a changing economic base. But that demands that it focuses on providing health, education, security and similar services and transfer payments to the old and sick - and assigns much of the capital works to entities required to be self-financing and thus subject to the discipline of the market. The government owns far too many assets already.

For sure, the tax system is too narrowly based. But this report suggests nothing major to change that.

The report is basically a public relations exercise to protect the status quo. That is not surprising as it was written by officials with inputs from academic economists and accountants (specialists in tax avoidance). Where were the entrepreneurs, the demographers, the fiscal policy experts, the investment bankers, let alone the representatives of low-income groups?

John Tsang Chun-wah has shown yet again he is incapable of new thinking, to advance policies that accept welfare responsibilities ungrudgingly and improve the currently abysmal returns on public investment.